A “Step Up” in Mobility

"Step-up" is a device conceived by Israeli entrepreneur Ilan Aviv and developed by Ziv-Av Technologies, attaching to motorized wheelchairs and allowing them to go over obstacles up to 20 cm (about eight inches) high.

This tilting requires a lot of space inside the body, Webster said, and creating that space means that either large incisions must be made or that healthy tissue that is in the way must be removed or pushed aside. “Less tilting means less damage to healthy tissue,” he said. This naturally results in less-invasive surgical procedures.

The device, itself, is of a fairly simple design, comprised of an outer elastic tube made of Nitinol, a nickel-titanium alloy. A small wire uses a hand-operated lever or a standard DC motor to pull on the side of the tube, causing it to bend.

Webster and the Vanderbilt Univ. team are working on FDA approval for their invention and hope to find a partner to sell the prod
uct commercially.

A “Step Up” in Mobility

Prostheses or surgery can help people regain limbs that they’ve lost, but some people still have limbs that don’t work properly and so are confined to a wheelchair and all of its limitations. Thanks to mechatronics, a company in Israel is giving motorized wheelchairs that ability to navigate steps and street curbs with movements that weren’t possible previously.

“Step-up” can be attached to motorized wheelchairs and allows them to go over obstacles as high as 20 cm (about eight inches), said Dvir Brand, vice president of engineering at Ziv-Av Technologies, the company that developed the product. It’s comprised of two pairs of telescopic arcs, each of which is powered using electrical motors. The device can deploy or retract, causing the chair to elevate and descend, respectively, he said.

The system’s design is the brainchild of entrepreneur Ilan Aviv, who tapped Ziv-Av Technologies to help him realize his idea. Aviv was inspired by the real-life experiences of his elderly loved ones, such as his mother-in-law, who were unable to do the things they wanted to do because of the limitations of their wheelchairs. 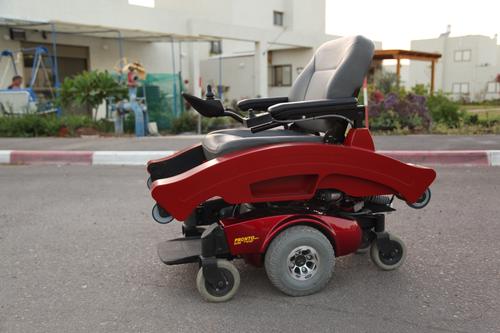 "Step-up" is a device conceived by Israeli entrepreneur Ilan Aviv and developed by Ziv-Av Technologies, attaching to motorized wheelchairs and allowing them to go over obstacles up to 20 cm (about eight inches) high.

"I took her to the hair salon, and there was a single stair at the entrance—one,” Aviv said. “Her electric wheelchair is heavy; even if we had gotten help from others, it could not be carried up the step. My mother-in-law sat outside the salon, humiliated. I asked her if this was usual, and she said yes.”

When she recounted to him other scenarios in which she had to wait outside of stores while sales associates did her shopping for her, “I told myself that I must save my mother-in-law,” Aviv said.

Mechatronics is key to how Step-up works, combining electronics, mechanical movements, and sensors to ensure the safety of the person in the chair, Brand said.

When Step-Up reaches a step or street curb, the system deploys front and rear arcs simultaneously. Each telescopic arc has a small wheel at its free end, which connect to the upper and lower curb.

The system deploys the arcs until the chair is raised to a suitable height above the curb and then drives forward the chair, using electrical motors mounted on the rear arcs wheels, until it reaches a safe descent on the curb’s upper surface. To ensure safe operation, the system uses proximity sensors that detect height differences and an inclinometer that ensures parallel elevation or descent at all time, Brand said.

“The issue of ‘one-step obstacle’ -- such as climbing a curb -- is of a great importance in the lives of people in wheelchairs,” he said. “The Step-up solution is about enabling people with disabilities to enjoy increased independence.”

Ziv-Av has received external funding to continue work on Step-up, and the product has garnered significant interest in Israel, though it is not yet widely available, Brand said.